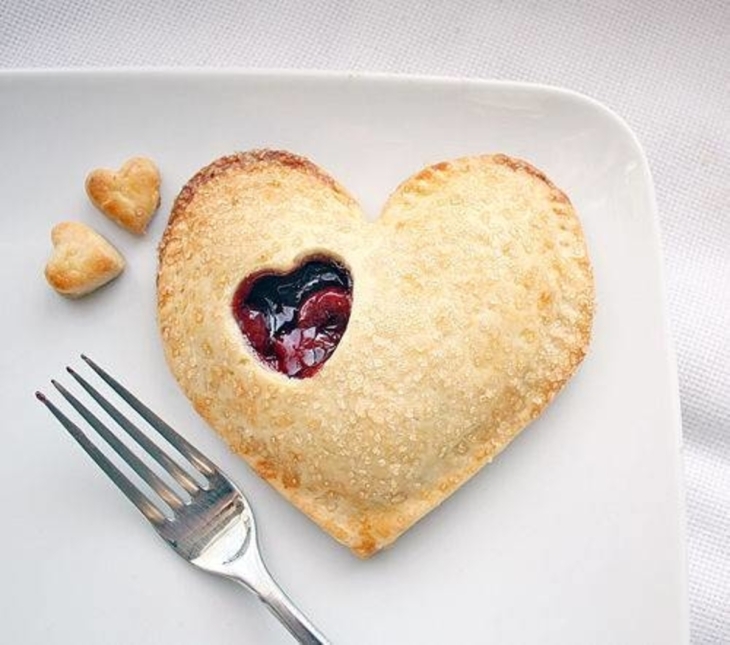 In my part of the world (the East Coast of Canada) pie is not simply another dessert choice. It is a social currency through which we Maritimers express our love. It’s what we take to the neighbour who has just had a death in the family, or the friend who has just had a bad breakup (and yes… pie DOES go with wine).

Pie is the dessert that says “I made an effort, just for you”, and that’s really what love is… the act of making an effort.  Anyone with two eggs and an oven can bake a perfectly acceptable cake from a box mix, but a pie takes some concentration. There are about a dozen ways that a pie crust can go wrong and most are pretty much invisible until you try to drive a fork through the finished product and find yourself needing some help from a steak knife. I know a few capable cooks who would rather cater the hors d-oeuvres for a wedding than bake a single pumpkin pie for a holiday meal with the extended family.  Pie making is hard! But it is a skill well-worth acquiring because when you get it right, the recipients of your God-like talents will sit back in their chairs and close their eyes and rub their tummies… and you will actually be able to see their bodies filling with contentment and love.

Pie could easily be a superhero weapon, pulled out of the folds of a magical cape to save the day.  Imagine the scene… the villain is about to blow up Gotham City when Batman whips out a homemade banana cream and BLAM!  The Joker takes one bite and falls helpless against the nearest wall, undoing the top button of his pants and starting to reminisce about his grandmother’s meringue… Because that’s how pie works.

I bake cakes to celebrate occasions, but I make pie to show my love. For my husband it’s lemon meringue.  The damn thing takes the better part of an afternoon to perfect, but it’s totally worth the effort because when he takes the first bite, I swear he looks like a little kid (chases that ‘middle-aged-man-with-responsibilities’ look right off his face).

My eldest daughter needs strawberry-rhubarb sometimes, just because.  Rhubarb is only in season for about a  millisecond every year, so the money and time required to even find the ingredients shows her that she is uber-important, which is kind of the point when you have two younger sisters.

For my middle child, it’s a chocolate-banana creation that I found in a 1970’s Hershey cookbook.  Like her, it is dramatic and impressive and excessive and almost (but not quite) too much.

And for my youngest it is something we call Nonna’s apple pie, which is grated apple on a shortbread base.  It is just like her… relatively easy to put together and just the perfect combination of sweet and tart.

Growing up, I had a neighbour who made a pie crust that literally melted under the slightest pressure from your fork. When I was having a difficult time over at my house, she would holler across the driveway that she had some “extra” pie.  I would run over and swing open her screen door and WHAM!  It was like running full force into the biggest hug in the whole world.

A hot apple-cinnamon scent would wrap itself around my entire body and massage the tension right out of my soul, and no matter what pre-teen angst was attacking me, it could not cause any harm while I was under the protective dome of pie love.  Eating that pie made me feel good and watching me eat that pie made my neighbour feel good, because it was something she could do to “fix” my troubles.

Maybe that’s why people in the Maritimes connect with pie.  We live in a beautiful but rocky terrain and we’ve got more than a few troubles that are hard to fix.  But we’ve also got a communal sense of humour about things and an unspoken, shared understanding that the big things are not always the most important things.

You can only talk about your problems for so long and then it might be best to stop.  Take a look around and try and find a bit of blue sky on the horizon.  Maybe bake a pie and share it with a friend.  Scoop on some ice cream or some whipped cream (or both).  Because pie is love.