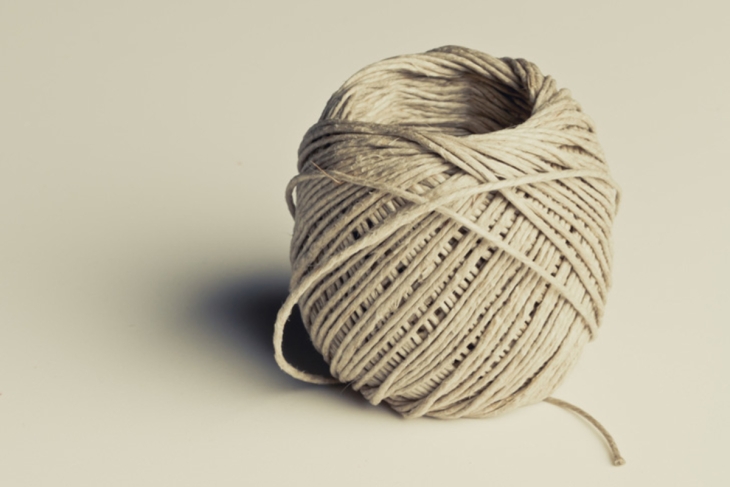 I have been actively searching for twine since September 1, 1983. I remember the date because it was written on the top of the rental agreement for my first flat – a three bedroom with high ceilings and inadequate heating that I shared with a couple of roommates. In honour of my newfound independence, my uber-practical father presented me with a black plastic toolkit filled with home-dweller essentials, including a roll of twine.

The twine went missing almost immediately. No one fessed up to using it… it simply disappeared. I replaced it. It disappeared again. Thus began the never-ending cycle. My father was right about the practicality of the items in the toolbox. 23 years later, I still have it, and still use most of the items inside. But the item that is most ‘handy’ is the twine, which can never be found in the toolbox… or in the gadget drawer in my kitchen… or in the cupboard where I keep the recyclables.

“Twine” is written on at least one grocery list every month. I buy it. I put it in the toolbox… and the gadget drawer… and the cupboard. But when I want to actually bind boxes with twine so that the damn garbage collectors will take away my flattened boxes, it is gone and I must search the house.

I have found twine in the most unlikely places: in my husband’s shaving kit, in the glove compartment of the car, in the pouch of a child’s hoodie, and under the corner of the dog’s bed, to name a few locations. Yet no one ever fesses up to using it… not the husband, not the children, not the dog. It is a mystery of life.

If the twine were the only thing prone to pulling a Houdini, I might be less consternated. But it is just one of several useful items that regularly vanish into thin air, including:

The list is endless. It’s as though a poltergeist has taken up residence and is interested only in items that can be purchased at the local Shoppers Drugmart.

Only I wonder about the strange goings on and the vanishing-into-thin-air situations that crop up on an almost daily basis. Only I grumble and mumble and seek confessions. Everyone else, including the dog, seems remarkably disinterested. “Put it on the grocery list, ” my husband will calmly advise me, having no idea how close he is to being smothered by a toss cushion. Because I do not want to buy more twine, or a new can opener, or another BBQ lighter. I want to find the things that I have already bought!

I am thinking of starting a facebook group for people like me… women who need to know where shit has gone! We could exchange images of lost items, and offer condolences to ‘friends’ left in the rain without umbrellas, or forced to attend weddings bare-faced, with nothing but a Bert’s Bees SPF 30 wax stick on their lips. We could post happy face emoticons to celebrate the recovery of earpods from betwixt the sofa cushions, or the finding of a library card in the ass pocket of a pair of jeans.